Spice Up Your Boring LMS with Google Lively? 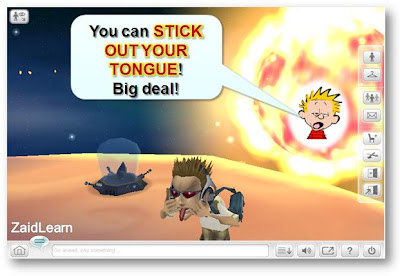 GOOGLE LIVELY?
A free browser-based 3D virtual environment that enables easy integration to social networking tools such as MySpace, Facebook, OpenSocial, and Google gadgets like Picasa and Youtube. With Google Lively, users' friends lists, feeds, and logins are tied directly to the social network. In addition, virtual environments are embeddable on any Web page with a snippet of code that can then be viewed as a full 3D environment, based in part on Emergent's Gamebryo engine, after downloading a roughly 9 megabyte plugin (Source).

THINGS I LIKE...
Firstly, there is no need to create a new account to get started. With my Gmail account I can simply register using it.
Secondly, you only need to download a small plugin before you can explore Google Lively for real. One up on Second Life! However, comparing Second Life with Google Lively, is like comparing Nintendo Wii with Sony Playstation 3 (or Xbox). Different galaxies and wars, targeting different aliens! While Second Life brought us new 3D virtual learning possibilities, Google Lively will bring virtual worlds to the masses. At least that is what they are targeting with this easy-to-use tool. If we want to compare Google Lively to other virtual worlds, I suppose we could compare it with Vivaty and IMVU, which are more similar.
Thirdly, Google Lively is also really easy to learn and use. No user guide is needed, trust me! Within minutes of discovering it, I was able to create my own cool avatar and virtual room; without much hassle. Basically, you can create or assemble your own stuff from a huge catalog of available shells (rooms), furniture, clothes, etc. Actually, you don't really create new stuff, but instead mash-up yourself and environment from available virtual goods from the fast growing catalog. This catalog is being nurtured and expanded by Google's development team (led by Jeff Matsuda, formerly at Warner Bros.) and a 200+-person team of international contractors.
Fourthly, Google Lively can be easily integrated with existing social networking tools such as MySpace and Facebook. Also, users can add content from Google sites like YouTube and Picasa. I suppose Google Lively will eventually be integrated with Google Earth and the rest of the relevant Google gadgets. I can imagine transporting myself to Oxford University (England) in Google Earth and having a Google lively chat with Tim Berners Lee.
Fifthly, you can easily express yourself with a couple of clicks, whether orally or physically. For example, the available portfolio of animations enable you to puke, stick out your tongue, kick someone down, dance, jump, scream, be happy, and even get really angry. In short, I am sure you can evolve your emotional intelligence by exploring your true self with all these animations, which are just a few clicks away.
Sixthly, the virtual rooms operate kind of independently, meaning you can't build a huge wall or a naked statue in front of another person's virtual property to annoy or blackmail them. Instead, you can discover new spaces or virtual rooms searching the catalog of rooms. Actually, Google lively is not really a virtual world, but a fast growing bunch of separate virtual rooms.
Finally, it could be a great place to socialize, make friends and have some fun. Enough! let's move on!

THINGS I DON'T LIKE...
First, I am not going to encourage my young kids to socialize there (at least for now)! Although, we cannot create our own animations and stuff, we are of course allowed to use our imagination to explore the rest. Of course that is exciting, but then again not always appropriate for everyone. For example, one virtual room I found, was entitled "Free S.." (you can guess the rest!) with a metadata description saying, "Title says it all". I suppose sooner or later the community will self-regulate itself from such things (or encourage more!), or perhaps we could have different virtual worlds consisting of specific themes or areas of interest.
Also, if we strip Google Lively down, it is not much we can do in terms of constructive learning (Then again that is not its main agenda either, as far as I know!). Currently, it is basically avatars, rooms, chat and a growing catalog of all sorts of virtual goods to decorate our virtual spaces. It is basically a chat system that you can visually spice up. Though, being Google I am sure they will increasingly add or integrate more features (e.g. forum, virtual classroom, whiteboard, puzzles, games) and provide more flexibility to users in terms of constructing content and learning possibilities. In short, it is quite limited for synchronous and asynchronous learning. I suppose Second Life is still miles ahead here! Yes, I would like to have my virtual lab enabling me to visualize, demonstrate and collaborate on experiments with my students. 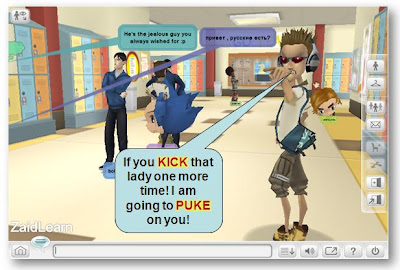 Also, it would be nice if we were provided with more features to protect ourselves from cyber bullies out there. As I was wondering in one of the rooms, I saw with my naked eyes a Russian mafia looking avatar slamming a beautiful young lady several times to the floor. Then he went on to beat up a 3-foot white teddy bear. Although, they were probably having fun exploring all the cool animations we can do, I am not sure a Professor would appreciate such treatment during a visit to the student's virtual lounge.
I can imagine how a lively lecture or tutorial might turn out in such an environment. When a student gets bored with the Professor's lecture, he goes over and kicks him to the ground, and then pukes all over him. Then the rest joins in! At least the Professor might get the point that his lecture probably needs improvement. But then again, the Professor was kind of distracted by the beautiful avatar girl in bikini.

You might also get frustrated with a new pop-up for every virtual room you visit (and a request to login again every time). Interestingly, I was in three different rooms at once, using three different avatars. Yes, I can imagine the lecturer being happy with a full class of virtual students, and then later finding out that all the students cloned themselves away to another room.

Oh, I forgot to mention that my Firefox browser slowed down and simply crushed during my Google Lively adventure. This could be due to several reasons, so I will not dwell upon it here.

LMS + LIVELY = LEARNING + JOY
Let's take off our negative hat, and look at the possibilities a browser-based 3D virtual environment can bring to our online learning environment. I can imagine integrating Google Lively (Student Lounge) with Moodle. Alright, with the existing features it might not be the right place to conduct lectures, tutorials, lab experiments, etc. However, most LMS that I have explored do not have an exciting online space for students to simply to hangout, connect, socialize and make friends. Using a LMS can often be a lonely experience, but tools like Google Lively could spice that up (at least for the students).
But then again some lecturers might get a shock of their life when they visit the virtual student lounge for the first time (Imagine! Perhaps they should be banned from there!). I suppose if some of the avatar animations could be excluded, or educators were given some super powers that would help. At least they might avoid a potential virtual physical or sexual harassment.
Hmm, by the time we establish all the rules of virtual engagement, students would have vanished to other virtual rooms were they can be their virtual self. In other words, perhaps students should set up their own rooms independently from their educational institution and LMS.
Anyway, since Google is behind this Lively 3D virtual world, we can expect a lot of interesting new enhancements and features in the near future. It wouldn't surprise me if we soon are provided with an easy-to-use virtual learning toolbox, with all sorts of interesting features and tools, empowering us with dynamic possibilities to facilitate engaging learning.
However, I couldn't help noticing while searching the catalog that every virtual item had a 'Price' tag hanging over it. Although, all the virtual goods are free for now, would that remain when things get more juicy? :)
Posted by Unknown at 17:57

I was playing with Lively the first day and came up with a few ideas. I'll be posting on them soon.

One use that I found, which works for Articulate users is that I can embed the room into the elearning course using the web objects.

So I could put some content into the slide and then have a chat about it in the room. As you mentioned, it's not necessarily as robust as it could be but it does make chatting a little more engaging.

Hi Doofdaddy (or whatever your name is!),

Cool idea! Thanks for sharing!

If you ask me, I wouldn't mind all the learning stuff taking place in Google Lively, but since there are a lot of pop-ups (or tabs) already, why not have a pop-up into a more conducive learning environment when necessary. For example, you might have a cool poster in your Google Lively room with an invitation to a virtual discussion (or a pop-up link to an Articulate presentation), which could take place in real-time (link to WiZiQ) and a follow-up one in a forum for those that missed the event, or were inspired to share their ideas after it.

Yes, if we set our minds to it, there are plenty of possibilities.

In the near future, Google Lively might just end up as a must have add-on feature for our LMS.

But then again, do we really need to be bugged down with a specific LMS? :)

Just read that Google Lively is shutting down on 31st Dec, which is rather unfortunate.

I'm still going to do my blog post. People will just have to use a different virtual world.

I liked Lively. Can yoiu think of any other similar sites? I liked that it was easy to use and not required a big app like Second Life.

I've looked at Moove, but the site is too licentious and hard to refer people to.

at the moment I can't think of any other virtual world sites that I would recommend :)

I suppose there is room for a new virtual world on the block :)

I signed up for Cooee. It has some promise. I finally did my blog post on using Lively or other virtual worlds.

What I liked about Lively was using the web object feature in Articulate.