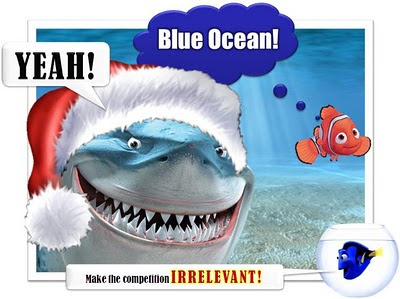 "Blue Ocean Strategy is a bestseller across five continents. It has been published in over 40 languages and sold over 2 million copies (since 2005). " - Source

BLUE OCEAN STRATEGY?
"Blue Ocean Strategy is a business strategy book first published in 2005 and written by W. Chan Kim and Renée Mauborgne of The Blue Ocean Strategy Institute at INSEAD, one of the top European business schools. The book illustrates the high growth and profits an organization can generate by creating new demand in an uncontested market space, or a "Blue Ocean", than by competing head-to-head with other suppliers for known customers in an existing industry." - Source

"Based on a study of 150 strategic moves spanning more than 100 years (1880 - 2000) and 30 industries, it provides us with a systematic approach to making the competition irrelevant and creating uncontested market space. " - Source


So, what is Blue Ocean Strategy exactly?

Click here to read more and learn about BOS for free.

If the BOS theory still does not make sense, this should nail it:

"Go where profits and growth are – and where the competition isn’t."
- Kim & Mauborgne (PDF)
...And what is the likelihood of that?

TWO PART SERIES
In this two part series I will explore Blue Ocean Strategy (BOS), and reflect back on a 2-day BOS workshop I attended a few weeks back (1st - 2nd December) at the UCSI Blue Ocean Strategy Regional Centre. In Part 1, I will zoom in on BOS as a theory and share some insights that might have been overlooked by the authors. In part 2, I will focus on Blue Ocean as a systematic approach to gain insight, innovate and create value, and explore some of the useful tools that we can use to visualize our own Blue Ocean, whatever that might be.

Having read the book twice (first time in 2007), read dozens of related articles, and participated in a 2-day BOS workshop, I believe I am entitled to share my honest opinions regarding this approach next. Though, I might be wrong! 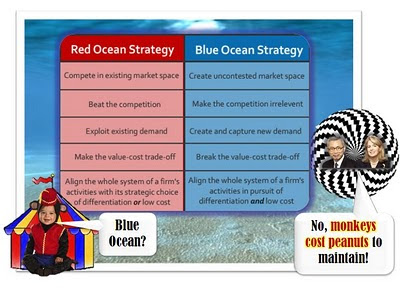 While I kind of like the Blue Ocean idea (Exotically relaxing and hypnotizing!) and most of the BOS visualization tools (explored in Part 2), I kind of find the 'Read Ocean and Blue Ocean Strategy' mambo jumbo (graphic above) and several of the case studies used in the book both misleading and a whole lot of _____ (you guess?)!

The BOS theory has already been around for a few years, and it is NOT short of criticism either, so I am not going to go on a full-blown (reinventing the wheel) shark attack. However, being fair to BOS, it has also rebutted six misconceptions about BOS (PDF) reasonable convincingly. 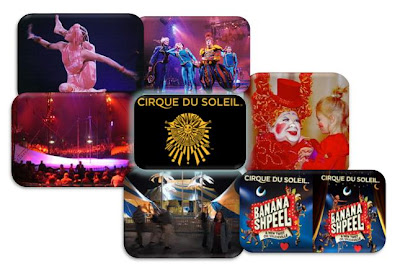 "Dramatic mix of circus arts and street entertainment." - Source
If you read the Blue Ocean Strategy (BOS) book, or listen to any consultant promoting BOS, they will for sure share with you the ultimate BOS example and pride Cirque du Soleil. No doubt the Cirque du Soleil (founder Guy Laliberté) is an inspiring, innovative and breathtaking story, but is it really a Blue Ocean?

First, Guy Laliberté never used BOS as a tool to innovate and create value. So, although it might be a Blue Ocean, it does not prove that the BOS as a theory is practical and implementable. Secondly, BOS like so many other theories often hijack success stories from a few angles (and hide others), and then absorb them into a portfolio of evidence of whatever they are trying to convince or sell.

Let's look a bit closer at the amazing Cirque du Soleil story, and explore whether it is really a Blue Ocean according to the 'Red Ocean vs Blue Ocean' framework:

WHAT IS YOUR POINT?
Having said all this, we could go BLUE arguing whether Cirque du Soleil is really a Blue Ocean or not. No point wasting any more time on this issue, though please challenge me on all accounts (can always update my post).

Having always been attracted to business improvement books, or books that explore creativity and business value innovations (attracted to the stories rather than the formulas!), I see a common trend and pattern in many of the books I have read, which is the manipulation of past and existing success stories to prove their ideas and frameworks for ultimate success. In other words, they will look through their narrow lenses and highlight what fits their theory, and then hide does aspects that do not fit.

The secret to sustained success lies in the marketing strategy (BOS misses this point)! No, it lies in strong ethical practices (BOS misses this point)! No, the secret to success is strategic execution (RIP)! No, it lies in the strategy itself. BOS claims based on its research that the strategic move, and not the company or the industry, is the right unit of analysis for explaining the creation of blue oceans and sustained high performance...bla, bla (p. 10). They are all right in their own lenses.

Though, I would argue that all of the above mentioned ideas, do not really highlight the real essence of companies that have had sustained success over time, which is exceptional leaders working with amazingly talented people. What would Apple today be without Steve Jobs, or Air Asia without Tony Fernandes?

Exceptional leaders have the ability to visualize (ideas), inspire, empower, and attract talented people to work for them, and as importantly they have the ability to continuously attract the world attention needed (or hire people that can!) to make it a sustained success. So, if you want a real strategy that really works, hire exceptional leaders and talented people with the right attitude (to your needs). Even if you don't have a great strategy, these people will most likely do a better job on strategy development than any consultant, or consultancy firm out there.

You are wrong! Maybe, I am!


PART 2?
Although, I find all the exotic buzz words (that can easily be manipulated) and the Red/Blue ocean framework from BOS a load of ____ (the real Blue Ocean!), they do have some interesting tools we can use to acquire useful insights and help us create value innovations. Your results using these tools might not turn out to be real Blue Oceans according to their immeasurable and exotic framework, but nevertheless the tools are worth a try.

So, what about the Nemo puzzle? That will be explored in part 2 (if I can cook up an answer!), and I will also reveal the ultimate secret to success, which is...

I read this book few months ago. I just accept the facts as it is, didn't even think about questioning the concept.

Now I doubt if one of my new year resolution will be very effective. Reading certain number of books each month.

Thanks for the input :)

Yes, I used to focus on quantity, but over time I have realized the amazing benefits on spending more time reflecting than the actual reading process. It is amazing how fast we forget (and just achieve shallow learning) when we speed read to meet some self-made target resolution :)

In short, I read a lot, but today I also try to question, discuss and reflect what I read more, and that alone I believe has been priceless (Beginning to love that word!) to my learning :)

You've made a wonderful analysis of the Blue Ocean Strategy! I can also recommend the book "The Halo Effect" by Phil Rosenzweig. This books discusses extensively all the errors most business authors make.

thanks for the positive feedback :)

I will check out the book you recommended.

I am certainly no wiz in business and value innovations, so that one should be worth a read for sure :)